It’s been a while since I last blogged and that’s because I haven’t done nearly enough riding in the past couple of months. I’m not really sure how it happened, but I went two months without a mountain bike ride before finally getting some pedaling in between Christmas and new year. We went up to Coed-y-Brenin and had a fab day climbing some big hills and enjoying the single track coming back down again.

2014 hasn’t got off to the smoothest of starts though. I woke up on New Year’s Day with intentions of big adventures and lots of miles, but in reality I had a horrible cold and felt utterly rubbish. And so it has been since then. I just can’t shake a horrible coughy, coldy virus and it’s seen me cancel two planned trips to Cwmcarn with some of the Bikellas girls. Boooo.

I’ve been going slightly crazy, wanting to get out on the bike and hit the hills. I’ve managed a couple of trail runs, but big days on the bike just haven’t been possible. To cheer myself up, today I decided to take a trip to the Brunel Way pump track in Bristol. I’ve only ever tried a pump track a couple of times before on my full suspension bike, but today I took Brenda, my Charge Blender hard tail, to have a go. It was my first ride on a hard tail too, and I really enjoyed it.

The idea of a pump track is that you only pedal at the beginning and then you use power through your arms and legs to get you around a course made up of rollers and berms. My Mr could get around the course twice without pedaling, but I’m a long way off that at the mo, as my cornering just isn’t up to scratch. It was a lot of fun though and I learnt a lot about generating speed without pedaling. It was a great way to spend an hour on the bike in the sunshine.

Here are a couple of photos of me at the pump track, having a go: 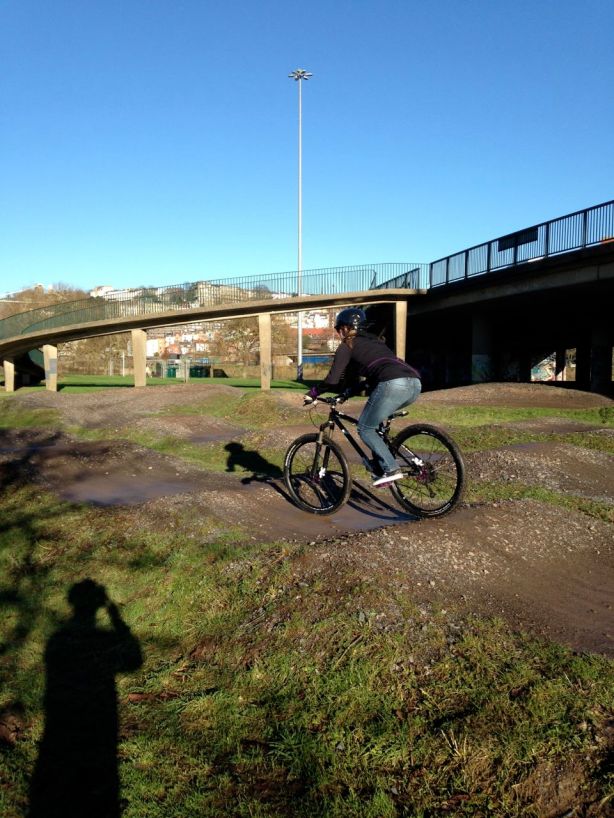 I’m hoping today was the start of good things for 2014. I’m not one for new year’s resolutions, but I have set myself a goal for the year: have lots of adventures! And now I’m pumped up and ready to go!