Hello! Remember me? It’s been a while! I won’t bore you with the details of why it’s been so long, but it’s fair to say I’ve really missed blogging and my little corner of the internet lately. So here I am – back!

So much has happened since my last post. I’ve bought a new bike – a Saracen Ariel 275 (whom I love dearly!), I’ve been to Ibiza for a week’s dusty, rocky, awesome riding in the sun, and I’ve been to France for a rocking road trip and some big bike rides. And it’s tales of that road trip that I’m going to share in this post.

It was back at the end of June, before the school holidays kicked off and filled the roads with caravans, and we were plotting a wonderful adventure that would take in the Austrian Alps and the Italian Lakes. The only trouble was that little thing called the weather forecast. Three days before our tunnel crossing, the forecast in Italy and Austria looked abysmal, so to social media I turned and asked what our new plan should be. And that’s how The Mr and I ended up heading to France in our van, with four bikes and an inflatable awning.

We started with a week camping at Sevrier on the shores of Lake Annecy. If you’ve not been to Annecy, add it to your dream holiday list right now! It’s beautiful. We spent a wonderful few days getting to grips with our paddleboards, pootling around on the lake, taking picnics on the boards, swimming, hanging out in a cave on the other side of the water, pedaling our road bikes along the traffic-free cycle path to Annecy town and generally chilling out. It was magic. 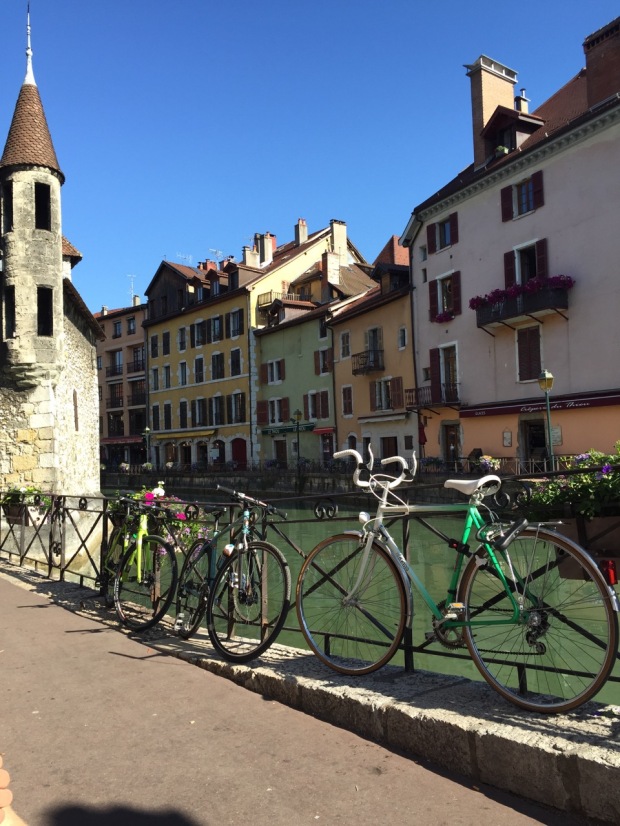 Our bikes felt right at home, joining the locals in town

Yes, it really was that beautiful

And then, we found out that there was mountain biking – or VTT as the French call it – to be done on Le Semnoz, the mountain right behind our campsite. Whoop! So, the Mr and I booked a day’s guiding with Ecole MCF. We met our guide, Nicolas, feeling excited but not knowing what to expect. We had no idea what kind of riding we’d be doing or even where we were headed.

Our guide was lovely – so friendly and super keen to practice his (already impressive) English. He showed us the way to the bus stop, at which we hopped on a bus with our bikes, ready to head up Le Semnoz. This was no ordinary bus though. For the back third of it was taken up with a bike cage. Yep, a cage with hooks and bungees for securing our bikes inside the bus. How cool is that?!

Getting a little too excited about bikes on the bus!

We headed up the mountain, overtaking crazy roadies who were making their way up by bike, dripping with sweat in the 37 degree heat. Madness! When we got to the top, Nicholas explained that we’d have a steady start, so that we could warm up and he could see what kind of riding we could do. So the early part of the ride was mostly descending on fireroad and wide woodland paths. Nicholas soon learnt that we were up for more technical riding and tweaked the rest of the ride to suit. He took us down some twisty, turny, techy singletrack, pausing to show us the tougher features and then standing with his arms out wide to his sides, ready to catch us if we stumbled! That was pretty funny and not a technique I’ve ever seen a guide trying before. I’m pretty certain if I had fallen, we’d have both tumbled in a mangled ball of limbs and bikes, so it’s a good job I managed to stay rubber-side down!

Riding the rough stuff, with Nicholas on hand to catch me if I fell!

As well as the techy fun, Nicholas showed us some really fabulous fast, flowy singletrack through the woods. It really was brilliant! Trees are my favourite things (after bikes) and riding through them makes me really happy. This is particularly true when the trees are interspersed with beautiful views down to the lake below. Just perfect.

In fact, we had such big grins by the time we reached the bottom, 2.5 hours after leaving the top of the mountain, that we booked Nicholas again for another morning’s guiding! And the second day didn’t disappoint. If anything, it was better than the first. Nicholas already knew the kind of stuff we liked, so took us on a more technical ride from the top to the bottom of the mountain, only very occasionally using the same trails we’d been on before.

I really did love riding my bike down Le Semnoz. I’ve never ridden downhill for so long in one go before. Two and a half hours with barely any pedaling is surprisingly hard work, especially when you’re used to Britain’s rather cooler temperatures. I found the rides testing, both technically (at times) and fitness-wise, but I loved them all the same and felt really chuffed when I made it to the bottom in one piece.

It’s fair to say, part one of our French road trip was a rip-roaring success. Stay tuned to find out what happened next…