A little while ago I posed the question ‘can this mountain biker really enjoy a road bike?’ It is to my surprise then that I find myself just a few months later writing a post about getting a bike fit on my road bike, ahead of what I see being a very busy year for road miles!

A lot of the credit for this major breakthrough must be taken by my good friend Aoife, who has been so encouraging and patient and who has introduced me to what is a genuinely enjoyable cycle commute, which we’re trying to squeeze in at least once a week. Aoife is one of those people whose love for cycling is entirely infectious and I’ve had to give in and admit that I’ve caught the bug: I love road bikes now! 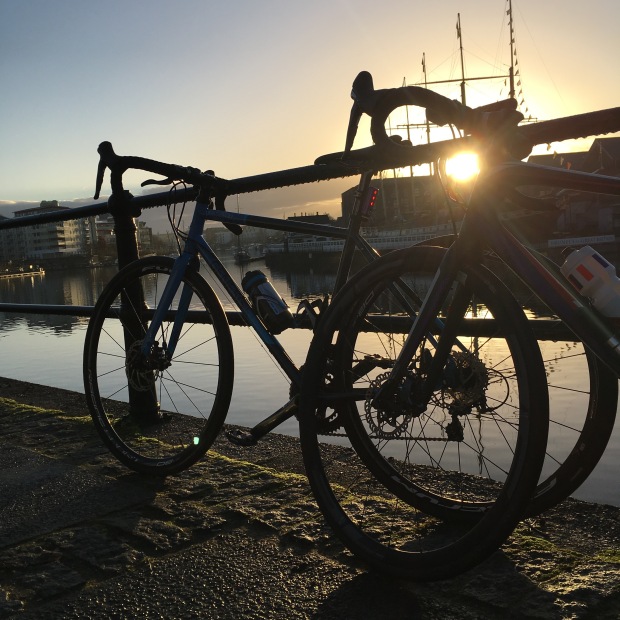 What’s not to love about this commute?!

With plans afoot for an exciting cycle tour later in the year, and against a backdrop of a continuing niggling injury, it seemed prudent to book myself in for a bike fit. So today I found myself pedaling over to BW Cycling in Bristol for what turned out to be an incredibly interesting hour and a half.

It’s fair to say I was in expert hands, as it was Oli Beckingsale who analysed my riding position, took into account my injury, my level of flexibility and made tweaks to my bike. I say tweaks, but in my case there were some pretty substantive changes to be made. After filming me pedaling away on a turbo trainer Oli:

By the end of the session it felt like I was sitting on a different bike. Other than some pain on the outside of my feet, I hadn’t realised the level of discomfort I was experiencing while riding until it was taken away. It’s true that I’ve not yet taken the bike back out on the road to feel what difference it makes while out riding, but pedaling on the turbo felt entirely different, and in a really good way.

Oli explained to me that too often people only go in for a bike fit when they feel like something’s wrong, when they’ve been experiencing pain for which treatment isn’t really working and they come to the conclusion that their position on the bike just isn’t right. It’s not so often that someone comes in for a pre-emptive fit, but these people also have a huge amount to gain, for they are far less likely to develop the pains in the first place.

Before going in for the fitting I really wasn’t sure if it was going to be worthwhile – I didn’t know if much needed doing to put me in a better position on my bike. But with my plans for a significant amount of road miles this year, and after seeing just how much needed tweaking, I’m convinced that this bike fit was money well spent. The repositioning of the cleats alone would have made the session worthwhile – my foot pain disappeared immediately, and before I spent far too much money on different shoes that wouldn’t have made the slightest bit of difference!

Have you ever had a bike fit? What did you learn?