We’ve been having some rather miserable weather here in the UK recently. It’s been wet and windy for what seems like months. We’ve been sitting inside, looking out of the window and hoping for some slightly less extreme weather to get a great ride in. This weekend though, my husband and I decided that we’d just have to go for it, tog up and get out there. Besides, I had a new waterproof jacket and I wanted to give it a good test.

I’d heard some great things about the Madison Flux jacket before I made the decision to buy it. But it was when I saw it in the flesh that I decided I really did need to give it a try. There’s no doubt about it, this is a good looking jacket. I went for the Aqua Blue version, as I have a bit of a thing for turquoise, but it also comes in a rather smart Chilli Red too.

I like the fit of the jacket, although as with other Madison kit I’ve tried, I needed to go one size up from my usual. In other brands I often buy a size 8 or XS, but in Madison I tend to go for a 10. The cut of the Flux jacket is slightly fitted, so going one size up gave me a little bit more room for an extra layer. The Flux is light enough that there’s no added bulk.

The jacket has a number of neat little features that give it something more than some other waterproofs I’ve tried. I like the breather holes in the underarm, which provide airflow, without adding the bulk and stiffness that zip openings can create. And the little squiggly, silicone print on the shoulders is a nice touch – it looks cool and is there to prevent your hydration pack from slipping. 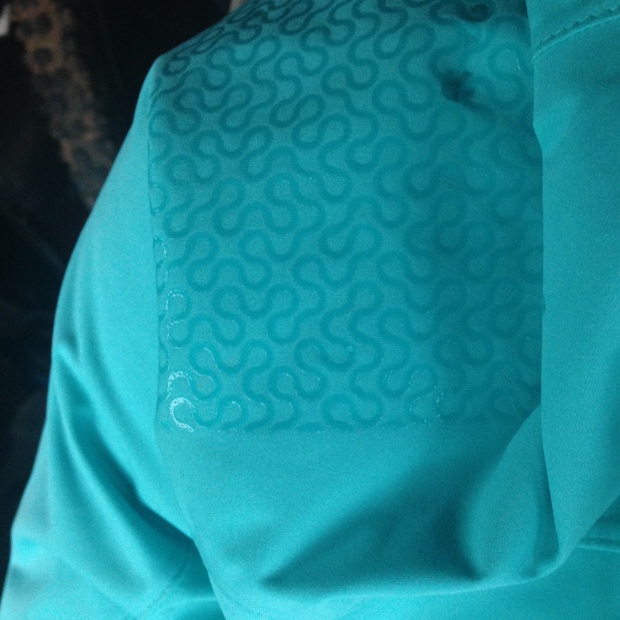 So, how did the Flux perform when put to the test in weather warning levels of wind and rain? This was the weather I took it out in:

And I have to say, it did a blooming good job! The best thing about the Flux is the fabric it’s made of. It’s called P4Dry and is far less plastic-y or tacky against the skin than any other jacket I’ve tried. This means you can happily wear with a short sleave jersey underneath and not feel sticky and uncomfortable – a real win in my eyes. The jacket’s also very lightweight and not in the least bit restrictive, despite it’s slightly fitted cut.

I really did give the Flux a challenge in the weather I took it out in today and it’s waterproof-ness stood up to the test. After riding for an hour and a half in some of the heaviest rain I’ve ever pedaled out in, I didn’t feel wet, cold or uncomfortable at all. When I took the jacket off, it did have a slightly damp layer inside, but no more than you’d expect after a heavy pedaling session in very wet conditions – nothing can be 100% breathable after all. 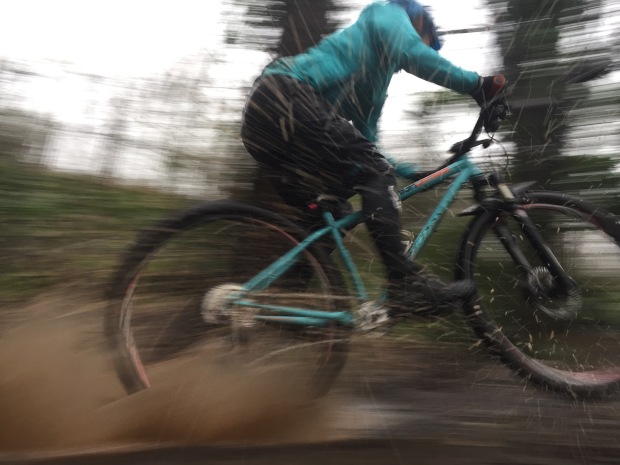 The Flux stands out on the trails

It remains to be seen how well the Flux will clean up after the muddy beating it took today and I can’t say anything about it’s durability yet, but I can tell you that I’m very impressed with how it’s performed so far. It’s a lightweight, attractive, waterproof jacket that does the job in heavy rain. Thumbs up Madison, you’ve done a good job.

he Madison Flux retails at £115, comes in Aqua Blue or Chilli Red for women, and Black, Chilli Red or Limeaid for guys.

Thanks to my husband for the photos today.